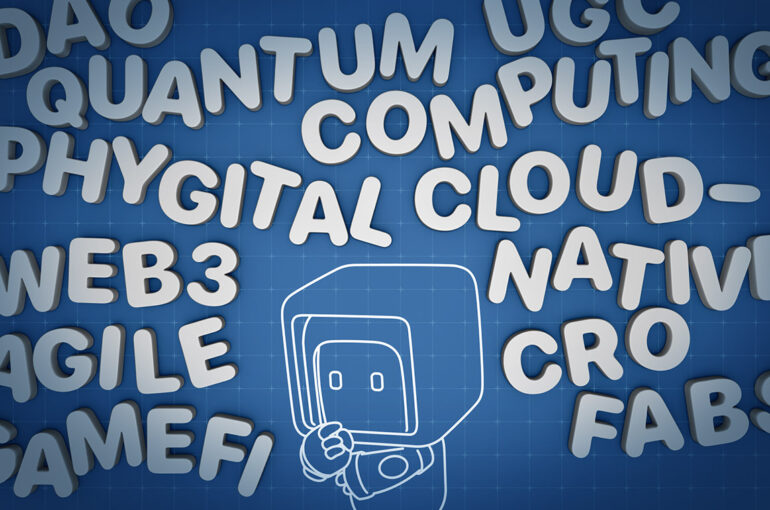 Taking the stage for the first time in two years, STRG’s CEO Jürgen Schmidt gave a keynote address at the 2022 JETZT Summit – an Austrian digital marketing conference for regional professionals. Once again, he displayed a natural talent for conveying complex technological concepts so that the audience could grasp the creative potential behind the tech buzzwords.

Dig a bit deeper, though, and you’ll start to notice some differences. The conference’s very name, JETZT (German for “now”), describes its scope: According to its website, JETZT is “dedicated to the constantly changing frameworks, the ever-new challenges and numerous best practices in the areas of digital marketing, digital advertising and digital media.” In other words, the current state-of-the-art trends (and perhaps those in the near future).

Jürgen and STRG, on the other hand, are focused on the potentials for complex deep technology on digital media. Not only now or in the next two years, but up to a decade down the road. To STRG, “Deep Tech” isn’t just a buzzword describing something on the distant horizon. Rather, it is already and will continue to be the driving force behind a new generation of MarTech – but only if it is correctly understood for what it actually is.

On 5–6 April 2022, the JETZT Summit held its second annual conference, yet it was the first to be held “in real life.” Due to the Corona pandemic, last year’s premiere was held completely online. This year, 270 marketing, advertising and media professionals from the DACH region gathered in Vienna to gain insight from 70 renowned presenters, who dished out their know-how giving keynote speeches, sharing best-case anecdotes and holding panel discussions.

For the second year in a row, Jürgen was invited to deliver a keynote speech on the opening day. Last year, he introduced many in the audience to basic concepts behind data-driven publishing. This year, he kicked it up a notch, doing a deep-dive into the mathematics and frameworks driving the hot-button topics of MarTech.

“JETZT is actually a marketing conference so hardly anyone there really has a clue about deep technology,” Jürgen claims, with only a hint of exaggeration. “I’m giving speeches like this to teach them, because I think that to be creative in the fields of technology, you need to understand technology, otherwise you’re just repeating the same old stuff — talking about third-party cookies over and over or arguing the pros and cons of Facebook and Google. But you can’t get your head around what’s possible.”

Jürgen’s 45-minute-long presentation was titled “Five Technologies to Change the World.” Its 59-slides rapidly fired a barrage of complex terminology and concepts that left some of the audience perhaps a bit shell-shocked, but this was on purpose. “Most marketing people attend only marketing conferences,” Jürgen believes, “so I provide them with the content not typically covered. The opposite is also true – most of the techies just go to developers’ conferences and never think about for whom or what the technology is used for. I see my role as trying to build bridges and understanding between these mindsets, helping both marketers and developers to become more creative in their work.”

One slide showed Gartner’s “Impact Radar for 2022” and helped introduce the audience to some buzzwords they’ll surely be using in the future: “Multimodal UI,” “Generative AI,” “Homomorphic Encryption,” “Self-Supervised Learning.” Jürgen used this as a point of departure for talking about four main technologies* that are changing the world of digital media: genetic algorithms, neural networks, data science and cloud services. Jürgen implored to the audience not to just memorize this terminology than to understand the creative potential they unleash.

The problem with many in the digital-marketing field, Jürgen believes, is that they’re using the right buzzwords, but they don’t understand what they actually mean. “Because of that, they will never be creative with technology and they’ll never figure out how the pieces of the puzzle fit together. As long as you just keep bullshitting by using the buzzwords, you’ll never progress.”

For example, the names of technologies that have enabled user tracking and targeting have changed over the last three decades, but the technology behind them is the same as it’s always been. It actually has got little to do with AI, neural networks, semantic analysis, NLP, machine learning, data science, evolutionary algorithms, and the other buzzwords floating around the MarTech field.

“When people in digital marketing boast that they are using neural networks, etc., they really aren’t. To achieve what most of them do, you don’t need a neural network,” protests Jürgen. “For example, five years ago, when we launched the Salzburger Nachrichten’s digital platform, we published an article about how we created the first portal in Austria to use AI for tracking user behavior and for feeding them customized content.

“This woman from another news portal replied, ‘Fake news! We’ve been doing this for 15 years already.’ But anyone knowledgeable about technology knows that couldn’t have been possible – you didn’t have the required hardware, frameworks back then. Sure, you could always do keyword tagging and simple text-string analysis to generate linked content, but from a technologist’s point of view, that’s really old-school, rules-based stuff.”

One not-so-funny example illustrates how much semantic analysis has progressed in the last 20 years: When the 2004 tsunami devastated several Indian Ocean countries, killing nearly 230,000 people, some portals were automatically suggesting articles about and ads for Indonesian tourism. The software compared the text strings correctly (beach/ Indian Ocean/ waves), but didn’t interpret the disturbing context behind the content.

Even today, such rules-based decision making decides which user gets fed which content and marketing. If the weather is sunny and warm, it’s okay to run an ad promoting an outdoor restaurant, but not If it’s raining. “You don’t need AI for this,” says Jürgen. “It has nothing to do with data science or deep tech. Even worse when it comes to typical demographic grouping – individuals’ interests and behaviors don’t always fit perfectly into the typical categories of age, gender, education, class and location.” Just because you’re a 20-something Viennese who once clicked on an article about an artisanal bakery doesn’t necessarily mean you’re a Bobo who buys your clothes at a thrift shop.

True AI enables the data to be parsed on a far deeper level than just identifying similar strings of text or tags and classifying them according to some predefined set of rules. AI rather learns the rules of the game on its own – much like how a child learns language through constant trial-and-error –  detecting common patterns in an immense universe of data. Neural networks and machine-learning methods can predict trends of (constantly shifting) human interest without being biased or limited by man-made rules. AI Algorithms optimize themselves, find correlations where no one could imagine they could exist.

After 45 minutes of heaving their minds blown, the audience was finally able to exhale as Jürgen’s presentation came to its last slide:

If all this still just seems like a bunch of unintelligible technobabble, DON’T PANIC! “STRG is not a digital marketing agency, but rather a technology hub for the field of digital media,” Jürgen reassures us. “STRG is here to educate and support you. We are the right people to contact. We won’t just give you a set of new buzzwords, but we’ll give you an underlying understanding of them and back it up with the expertise that will help grow your business.”

*So, Jürgen, what is the fifth world-changing technology? “Warp-drive, of course!” You know, distorting the space-time curve to travel faster than the speed of light? Well, maybe. Even though Captain Kirk finally made it into suborbital space riding Bezos’s Blue Origin, he might have to wait a bit longer to “boldly go where no man has gone before”  😉

A conversation with CEO Jürgen Schmidt about the “new normal” and the impact of the pandemic on the workplace, because at STRG “business as usual” means always being agile.

Magazine
Contrary to popular belief, a small niche publisher with only a relative handful of unique visitors can profit from an expensive investment in its digital operations. Go ahead, be “klein aber fein,” because the internet allows your niche to scale....

We talked with STRG’s Art Director, Pavel Guzenko, and Lead Developer, Ralf Traunsteiner, about how STRG practices DesignOps, what software tools enable it, and how Agile processes make it all work as efficiently as possible. STRG and its clients benefit from DesignOps in that potential roadblocks are avoided; interdependencies are recognized; project costs are kept within expectations; and the overall quality of the end-user experience is made measurably better.